When together my kids are usually focused on something else—swept away by the latest discovery of a critter that has appeared in our yard, some game in- or outside, or learning a new song from an iPod via the communal sharing of ear buds. My kids spend a lot of time together because they want to. They enjoy each other’s company and I feel that is remarkable given the age span of nine years between the four of them.

But sometimes there are moments when they are out of their world and with me. Sometimes the real world intrudes and they notice the unabashed stares directed at us.

Aubry said just the other night, “I don’t like people staring at us. Why do they do that?”

My answer was that we are a multiracial family. And her response was, “So what?”

Well, the “so what” is that what we know as “normal” is not necessarily perceived as such outside of the loving nurturing circle of our family, extended family and friends. People judge. Communities and family experts judge. And yes, there are those within the adoption triad that judge too.

Please don’t stare. And don’t make assumptions. Mark and I adopted for a very selfish reason; we wanted more children.

Can you help? When you see a family like ours, where there are obvious racial differences, please don’t stare but look deeper with your senses and you’ll see discover a family—in every sense of the word. 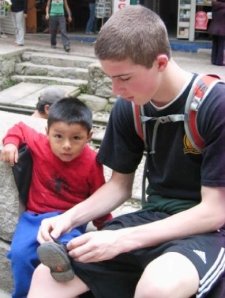 Holden arrived home, from his first day of tutoring with one of his classmates (he will do this twice a week for the rest of the semester). They had been assisting middle school teachers in another school district in Math and English.

I’ve heard Holden say words along these lines for years, but the meaning of helping someone really sunk in when he traveled to Cusco, Peru last March on a medical service trip with parents, teachers and students from his school. Mark and I saw the trip as a life-changing opportunity for him—to deepen his compassion for others and appreciate the scope of humanity. When not helping in the medical clinic, he played soccer or entertained the children by being his silly self.

We continue to see him step up, to offer his services to others. I firmly believe that Holden will always be active in community service and that he will pass this passion to his children. 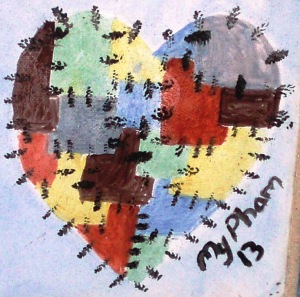 They lay on mattresses, on top of the sharply angled cement walls that run from the street and end tucked up under the overpass of the southbound city thoroughfare. They were wrapped in blankets and layers of clothing in an attempt to ward off wind chills that registered in the teens. My heart ached and I said a silent prayer as we sped past in our toasty car.

We parked in the garage and, although we had winter coats, scarves, hats, and gloves on, the northern wind bit through our clothing. We walked briskly and then ran across the street in order to get all six of us across before the light changed. A man sat bundled at the base of the traffic signal, trying to stay warm.

I was focused on keeping my two stragglers (Aubry and Greyson) with us. In my peripheral I saw Holden reaching over to the bundled-up man. And then I heard the change in the quiet cold evening. Inside I felt pride. I said nothing as he caught up with me, but took his hand and squeezed it hard.

We joined the rest of the swim team members and their families in the Italian restaurant. It was our annual dinner before their state sectionals. We would be full of pasta, thank you’s, and hope for our kids.

What did that man on the corner have? Only the hope that he would make it through the night. I forgot about him as the evening moved on.

The pasta was filling and we requested to-go containers. We bundled up for our trek back to our car. As I went to cross the intersection, Aubry and Greyson were not with me. They had stopped in front of a different man who had taken over the same spot of the homeless man who had been there earlier. I wondered if the money Holden had given had in some small way helped him—towards a meal or something warm to drink. I witnessed my daughter handing over the remains of her dinner. Greyson stood behind her, watching and then came running up to me. Without speaking I handed him my container and he ran back to the homeless man. I had walked a little closer and heard the man’s quiet thank you. I saw his gratitude as he looked at me. The man quickly opened the containers and began eating. He was very hungry.

I held Aubry and Greyson’s hands as we walked off. We all talked of homelessness and I was touched by my kids’ compassion—their concern for the man’s well-being. In a small way they came forth and helped someone who was in need, if only for one night. I know they will again. We are raising compassionate kids. Pass it on.