Reflecting on Trayvon and My Son

Not all families look alike, nor are they created in the same way. This is true of mine, and although I am always aware that

my family doesn’t match, and that my kids are at risk for prejudice and racism, the murder of 17-year-old hoodie-wearing Trayvon Martin, shot and killed by self-appointed neighborhood watch captain George Zimmerman (Hispanic) on February 26, 2012 in Sanford, FL, on his way to visit his father in a gated community from the 7-Eleven, armed with only Skittles and ice-tea, hit close to the bone. Trayvon was black.

The tragedy begs that I reflect deeply on the prejudice and racism that contributed to horrific event, and what these factors, as they stand now, portend for my children in the future. I attempt to assess how my Hispanic son will be seen by others, perhaps looking suspicious, as Zimmermann stated about Trayvon, because the assumptions may be that he does not “belong” where he lives. Or works. Or plays. All because of the color of his skin and the ethnic features that scream his heritage.

Raised by white parents, our son reflects our values and attitudes. He has also acquired a case of “white privilege,” courtesy of us.  He is comfortable being anywhere, among anyone, and that could be a detriment in the future when he is in the company of others who are not comfortable with him, because he is a teenager or a young man or a man who exudes confidence. And he is Hispanic.

Adolescent boys are targets for law enforcement. Add in some color and they become a bigger target. I was taught by my parents that the police are my friends and protectors; Hispanic and Black parents teach their kids to fear them, and often for good reason. Look around you. Observe who’s pulled over in the communities in which you drive through…

How do we “hammer” it home to our son about how he is viewed outside of his safe and loving family and circle of supportive friends? How do we, with our “white privilege,” help our son who has absorbed it, understand the seriousness of being treated a certain way by people because of his appearance? How do we teach him to “take it,” while also standing up for himself?  You see, we can talk the talk, however we can’t walk the walk… We are not of his race or ethnicity, and so we rely on others—peers, role models and professionals of his race and ethnicity.  Will it be enough? I pray daily that it will be.

Trayvon’s murder is a senseless tragedy.  As a parent and a human being I hope you are sickened by what has happened and are watching the events as they continue to unfold. I hope you use his murder as a springboard for discussions with your children.

There was no need for Trayvon to die. This sad truth has brought the ugly national history of race and racism into the spotlight. As humans we need to address these wounds; we need to talk about race and racism. We need to cry, together. We need to pray for Trayvon, his family, friends, and for the countless others who believe and act in such ways because they are ignorant, fearful and weak. We need to work towards healing, and that begins with all of us.

Spotted! Multiracial Family in a City Near You

feel like we’re seen as some new exotic zoo species.

In Chicago last week Mark and I were sure that we were going to be anointed or given some medal for being a multiracial family. We stopped in the south loop to grab a quick bite before spending the day on Michigan Avenue.  A couple, perhaps a decade up on us, sat next to our booth. We wouldn’t have noticed them in the busy loud diner if not for their fascinating behavior—abundant “approval ratings,” indicated by numerous big nods and even bigger smiles.

Still weak from the stomach flu, I regarded my untouched soup for most of the meal, praying they wouldn’t approach because I didn’t feel like conversing with them. They didn’t, however every time I looked up the couple nodded and smiled at me or at Mark—if they caught his eye. The kiddos were facing us, unaware that we were being considered for sainthood. I was relieved when they paid their check and scooted. We finished our meal about the same time; Mark and I silently agreed to wait a bit before asking for ours, hoping the couple weren’t lying in-wait outside the restaurant.

The other day I took A swimsuit shopping since she outgrew her one-piece by several sizes. In the outdoor mall area two guys just about tripped over themselves goggling my young chics, who were completely absorbed in messing round with each other and G, giddy and free from a long day at school.

Yes, they are beautiful (as any mama of her brood would attest), but what was interesting was the young men (high school- to college-aged) were so over-obvious that I just stopped walking and stood watching them watch my girls. And you know what? They still couldn’t stop oogling my girls. The guys glanced at me. They took G in. They understood we were a mom and her kids. They knew I was watching them and they continued to weave and turn almost drunkenly as they looked again and again and again, and then over their shoulders again. I’d chalk it up to my girls being Asian, but not this time. The guys were Asian.

Now, of course, I have no idea through which lens the couple at breakfast viewed us, but it was mighty uncomfortable, and in our vast Chicago experiences, unusual. The Asian guys? That was something new for us. What was their lens? Young men eyeing lovely young girls? I don’t know… 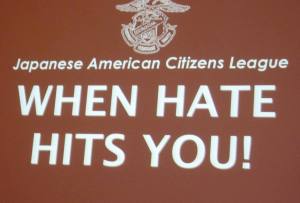 I really didn’t think I would be so deeply affected; after all we discuss bias, stereotyping, prejudice, and racism fairly often in this family. I also teach a class on transracial parenting to waiting and adoptive parents several times each month. A large section of that class addresses the position from which white parents parent—that of “whiteness,” of privilege, of having little to no life experience of overt racism directed their way.

Mark and I scheduled an early “date night” out. More of an educational evening for transracial parents, if you will… We planned on attending the workshop “When Hate Hits You: Dealing with Anti-Asian Sentiment,” put on by the Japanese American Citizens League (JACL), “the oldest and largest Asian American civil rights organization in theUnited States.  The JACL monitors and responds to issues that enhance or threaten the civil and human rights of all Americans and implements strategies to effect positive social change, particularly to the Asian Pacific American community.”

The workshop began with a brief overview of the Asian American history. I recalled much of the history, having studied it in high school and college. Although I had been bothered about what had happened, I was removed from the events. Now, years later, I sat with my husband revisiting this history from a different perspective—that of a parent of Asian daughters.

The material in the PowerPoint presentation was not what I would describe as graphic, but the images, words and stories that were shared were powerful, eliciting alarm from me. Tears followed and I struggled to swallow them in the room full of mostly Asian adults. I was choking down the hot paralyzing fear I had for my daughters.

It was pointed out that recessions and economic turndowns are often the catalysts that cause people to scapegoat others. People find themselves unemployed and they look for someone to blame. Such was the case of Vincent Chin, a watershed case for the Asian American community. We are witnessing this again, with the push for sweeping illegal immigration reform, primarily targeted at Hispanics (the race profile that encompasses my youngest).

Even though I have been educating my kids about bias, stereotyping, prejudice, and racism, preparing them for the injuries that will likely happen, I can not control what and when the incident(s) will happen. The workshop also underscored that I have a great deal more educating to do with my kids and with the parents I work with.

I liken arming your child to deal with racism to preparing them to drive. You send your child to drivers ed and you also spend countless hours with them, talking about the myriad of responsibilities related to driving. But, don’t forget; there’s “the other guy.” The unknown person and you never know where he’s going to come from, if he will cross the center line or run a red light and crash into your child, harming them, or worse. We parents need to keep talking about that “other guy.” …And praying he never shows up.