Remember the story of The Ugly Duckling? Where a baby swan was hatched and raised by a duck? The mother duck could teach the ugly duckling everything there was to being a duck, but she couldn’t teach him about being a swan.

The baby swan was perceived as an outsider and, therefore, believed he was ugly.  He didn’t realize he was a beautiful swan until he was an adult, but he had already suffered so much.

The story of The Ugly Duckling is about how a creature feels when he is not connected to his birth heritage or culture.  It’s a story about a swan in search of his place and his identity.

When I read this story to my children, I took away a deeper message as an adoptive parent. The story of the ugly duckling is similar to transracial adoption and what needs to happen within the adoptive family.  Like the ugly duckling, my children are in search of self.

I have found that one of the biggest challenges as an adoptive parent, especially as a parent to transracially adopted children, is that I cannot meet all of their needs.  I know each of my kids feels they belong in every possible way.  They know that each of them holds a special and unique place within our family.  They know they are deeply, deeply loved.  I can, have, and continue to teach and share my history and heritage with my children.

I do all I can to make their heritage and culture available to them, but meeting my children’s needs to discover their birth heritages and belong to them – as they choose, well, I can’t do that. Culture is lived. I’m White.  I can’t live my children’s cultures, but I can honor them – and do.  My kids know that I care how they feel and what they think about adoption and their race, ethnicity, and birth culture. (They all have different feelings and thoughts.) They know that they have my, and their dad’s, total encouragement to explore, discover, and embrace their birth cultures.  It is my hope that my children will continue to be happy and grow into confident and well-adjusted adults.

What can you do as a transracial adoptive parent?

Sometimes the whole family isn’t on-board with the decision to adopt, especially if the adoption is of a child that differs ethnically or racially.

My father–in-law was, Bruce, “concerned” when we told him of the decision to adopt from China. He said something once and then kept his feelings to himself. That alone spoke volumes about how he felt. This was a man I loved deeply, but was known to tell the occasional off-color joke. Mark and I had already made our decision and proceeded with the adoption. No one was going to dissuade us. We hoped he’d come around.

One of the adoption support networks, Families with Children from China, Indiana, creates and sells a beautiful annual calendar. My father-in-law saw it and told us, “I can’t wait to meet my granddaughter.”  We were so happy to hear that his heart was open.

When we arrived home with Josi ten months later, Bruce was there to greet her at the airport. After Holden, he was next to hold her. She went right to him. He held her close, kissing her, his face infused with love.

Bruce came over the next morning, but Josi pushed him away after feeling his beard. She didn’t like the scratchiness of his whiskers. He returned later that day, clean shaven.  She snuggled up with him. 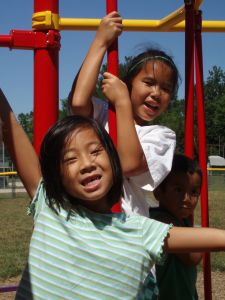 Bruce came daily, always making sure he had no beard. Josi had her own special name for him – “Pa”.

I never heard Bruce tell another off-color joke or allow one in his presence. He opened his heart to his other grandchildren as they came home, embracing them with his unconditional love.

Adopting from Guatemala was wonderful, because we were aware of how the process was proceeding. It was nice to be kept abreast of Greyson’s growth, milestones and have continuous pictures – some with him wearing clothes we had sent.

Adopting from Guatemala was extremely challenging at times, because we were aware of how the process was proceeding.  We were, okay – I was, looking at the benchmarks of the process constantly and driving myself nuts. Information about him came regularly; almost a “180” compared to our adoption experiences with China, where we knew nothing until receiving our baby’s referral four to eight weeks before traveling.

Greyson’s journey home was fraught with delays. What we thought might be a five to six month wait, took nine. The first delay came over the Christmas holidays, when most of Guatemala shut down for most of the month of December. Our paperwork had been received, but it sat, unattended for forty-five days. Then we ran into the two week Semana Santa (Easter) and that put us back a few more weeks. We went down to see him shortly after that, to hold our six month old son and bring back the memories of his scent, feel, and taste. We took tons of pictures to share with our kids, family, and friends back home. As wonderful as it was to spend the five days with him, it was painful to leave.

We believed we would be bringing our new baby boy home in two months or so, but received a phone call in June. We had been pulled out of PGN (Procuradoria General de la Nacion). During translation an “s” was added to one of our last name once in the entire dossier and, yep, they kicked out our case. We had been about a week away from getting the pink slip (issued by the U.S. Embassy after the adoption has been approved and the adoption decree is issued).

Now, in Guatemala, they don’t fix it and put your dossier back in line, they escort you to the back of the line. There are no words to express how I felt…

So the clock started over, roughly three more months of being on pins and needles – would it happen again?

It didn’t. We flew through the second time and upon receiving word that his paperwork was finalized, we (with Holden) were packed and on a plane within twenty-four hours.

We returned home eight days later. The girls couldn’t wait to absorb him, falling all over themselves to get to him. I had them sit down . Greyson crawled over and plopped into Aubry’s lap, like he’d been doing it from the day he was born.